Dr. Rachel McLaughlin Serving in Kibuye, Burundi
From the Field

By Dr. Rachel McLaughlinNovember 9, 2022No Comments
.

I’ve been back at work at Kibuye Hope Hospital in Burundi for 4 weeks now, serving as the hospital’s only OB-GYN.

Sometimes leaving a place and returning is the best way to gain perspective.  I was pleasantly surprised by the work that continued in my absence.  For example, there was a 2+ month gap when no specialty-trained doctors were available to work on my service.  Normally this would have meant no ultrasounds and no scheduled surgeries, but my three generalist doctors stepped into that gap.  During those months, they continued to perform ultrasounds at a rate of over 200 per month, and Cesarian sections that needed to be scheduled were also done.

It’s a really exciting thing to see all the training that we do pay off–a tangible result of our primary goals for being here.

I often get asked what my days look like as the only OB-GYN for a large chunk of the country (there are several dozen OB-GYNs in the country, but most are based in the capital city of Bujumbura).

So, what is it like to be the only specialty-trained OB-GYN for half of a country where birth rates average 6-7 per woman, in a country of 10 million people? 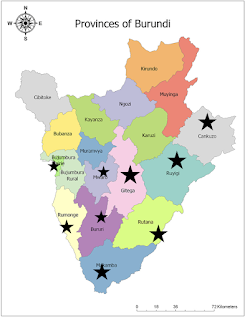 On Mondays, I have no idea who will show up or how many women will want to see me.

That’s because if a general doctor (from about half the country) decides that a lady needs to see a gynecologist for some reason or another (fibroids, infertility, recurrent miscarriage, prolapse, etc), she will probably wind up at my clinic’s doorstep on Mondays.

On Tuesdays and Thursdays, I perform scheduled surgeries. Many are scheduled Cesarian sections. We are trying to encourage showing up during a scheduled time instead of showing up in labor when complication rates are higher for the woman and her baby!  But I also perform hysterectomies and myomectomies (removal of fibroids), ovarian masses, cervical cancer, and a range of other random things. Clinic, surgery, and rounding in inpatients are all pretty normal and standard.

But the harder thing is being the go-to hospital for half of the country’s obstetrical emergencies.

Considering the circumstances, I am somewhat surprised that I don’t get MORE emergencies. But what it means is that I never do the normal deliveries, the straightforward, healthy, and happy outcomes.  I never do the primary Cesarian sections, with no scar tissue.  I’m almost never the first doctor someone sees for a chronic problem that has maybe been going on for years. I often do see emergencies and tragedies. Women who have a pregnancy in their tube instead of their uterus and have already lost two liters of blood in their bellies while they wait to be transferred to Kibuye.  Women who developed a complication intra-op during their 5th Cesarian and get transferred to Kibuye before the skin is even closed so I can do a hysterectomy.  Women who developed such bad infections after surgery that their incision is open and pus is pouring out of them (sorry if that’s too gross). I never know, when I hear the Land Cruiser ambulance chugging up past our house on the way up to the hospital when it will be a call for me to run up urgently at any hour of the day to do surgery because I’m always “on call” for those emergencies.

But I also get to see lives changed in a way I doubt I would if I was working elsewhere.

By the grace of God, although I have already performed half a dozen hysterectomies to stop postpartum bleeding since my return, all those ladies are alive and well and have returned home to their families.  That’s not always the case, and I do not take that statistic lightly.

I also helped generalist doctors perform two surgeries on women with late-presentation ruptured tubal pregnancies, a diagnosis responsible for 10% of the world’s maternal mortalities, and both did well.

So many stories are worth celebrating. One woman who had lost 5 children because of preterm deliveries came to my clinic about 5 years ago for a consultation. We did a simple surgery called a cervical cerclage and she now has two living children, who I delivered at term.  She returned this week to show me her 2-year-old, who’s doing well, and celebrate another pregnancy!

We often say that here in Burundi the highs are higher and the lows are lower. When the lows come we lament and support each other, and when the highs come we celebrate together and rejoice in God’s provision.

The work is hard but worth doing.  I’m grateful for all the people that helped out at the hospital in my absence, and I’m excited to continue training our Burundian staff and doctors in the days and years to come.

If you’d like to use your medical skills for the gospel, we’d love to talk with you! Come by our booth at GMHC (Nov 10-12) You can find us at: Booth 1002 (Main Building, Fellowship Hall 1)

Dr. Rachel McLaughlin has been a Serge Missionary since 2011. She and her husband, Eric, serve at Kibuye Hope Hospital in the impoverished rural interior of Burundi, in the heart of central Africa, where they care for patients while training national doctors as professors for Hope Africa University, a Christian Burundian University.

Erica AuseMarch 10, 2022
Stories of Grace In Your Inbox Subscribe