On Saturday, there was a young man in Bundibugyo, Uganda with a known mental health history who was wandering the streets.

He was attracting fear and attention to the point that people had injured him, and he was now at the police station.

In a culture where evil spirits are widely feared, and disturbing communal peace quickly draws backlash, he was in real danger.

And as the story unfolded, I realized I knew this young man.

Nearly 15 years ago, he was a bright pre-adolescent the age of Luke, and he played with our kids sometimes.

He was an orphan (both parents died) with minimal family support who excelled in school, but around that time he began having psychotic episodes and we diagnosed schizophrenia.

There was a short period of time when I kept him at our house to preserve his life. I remember thinking, if one of my kids with their curious intellects and competent expectations woke up in this boy’s life of nearly zero resources or loving connection, would they also lose their minds? What must it be like to be him?

He got better with treatment, and later went to Christ School where he graduated.

I had not seen him in all those years, but it turns out he joined the army and was out of the district most of that time, then suddenly showed back up in town in an agitated and decompensated mental state last week.

What does the community do with an acutely psychotic man in his 20s who has been beaten by bystanders?

Through the general way that news travels, calls fanned out, and it came to the attention of several that a CSB graduate was in trouble.

One of them went to the scene and got the police involved to protect him. Others called for medical consultation, which led to us hearing. I remembered my soft spot for this kid all those years ago and got in the car, picking up one of the alumni along the way (thankful to note he was also young and strong, as I wasn’t sure how much muscle we might need for protection).

The patient had been released to a “guardian”, someone in town who’s parents had been distant relatives of his parents. When we arrived, she told us that she could not help him so had sent him to his “uncles” and she would show us the home.

As we three got into the car, she called ahead and heard he had left the uncles immediately upon arrival and was wandering the roads again. She had the idea he’d come back to town and directed me down a dirt road short-cut.  Sure enough, within a few minutes, we saw him, barefoot and shirtless in his torn jeans. We stopped the car, unsure how he would react.

“MAMA SCOTT!” he exclaimed with a smile, coming straight to my window. “Now you are here. I am safe.”

I told him to get in the car, and he did.  That afternoon he was dealing in some alternate realities but relatively compliant. We prayed, and I told him we were all here to help him. It took quite a long time and a lot of talking to get him to get OUT of the car at the hospital. We went and brought him a hot meal, and I held his hand while Dr. Amon put in an IV and gave him medication.

It took the whole afternoon, but after the family (uncles/cousin) refused to contribute anything the alumni pledged to raise half the cost of an ambulance to the national referral mental hospital in Kampala and we agreed to raise the other half. We left him pretty knocked out in the bed, and the alumni had reached a relative who promised to come stay with him overnight.

Only the relatives had long since given up on this young man, and no one showed up. So, when he woke up Sunday early in the darkness, in the unfamiliar hospital bed, he just walked out.

By Monday the alumni were tracking him again. He was in town, moving about, much more agitated. Stones were being thrown.

Dr. Amon and I got in the car again and drove all over looking for him. It turns out that boda-boda drivers (the motorcycle taxis) are the best source of news, and we had multiple groups on the lookout.  When we finally found him in an alley, he was much worse. He was angry, scared, violent, abusive in his language and gestures.

But once again there was a deep part of his brain that recognized our history and he got in my car again.

This time it was much harder, with banging the windows, hitting at us, taking off his clothes, constantly threatening to kill himself or us. Honestly, it was a bit traumatic.

At the hospital, we could not lure him in even with the food we bought him, and I had to get him to a point where three men could grab him and hold him to get an injection. He still wanted to hold my hand, though I did get a little scratched in the process.

When he was naked he had grabbed my hospital coat in the car, so there he was sedated wearing the Dr. Jennifer Myhre Paediatrics coat only.

Now we knew we had to get him to the psychiatric hospital 8 hours away immediately. But How? 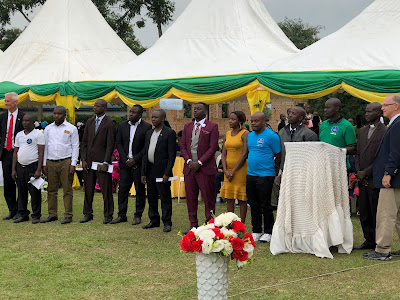 John coordinated raising the funds for half the cost of fuel for the ambulance.

And Sam, the alumnus who had helped me both days, said he would ride with him. That’s a two-day trip. He just dropped everything else in life and went.

These young men and women were deeply changed by their time at this school.

The rest of the community was throwing stones and hitting with sticks, laughing and chasing or fearing and reviling. And I get it, this was a frightening patient. But the CSB Alumni group responded with sacrificial care and concern.

They acted out of responsibility which they did not have to assume. They gave their time and money to help one of their group, to help someone whom the rest of the culture had discarded, someone who would most likely never be able to return the favor.

That’s the gospel in action.

This experience highlighted for me the ongoing multiplicative impact of Christ School.

It is not just the 4-6 years that these young people are within the school gates.

Once they leave, they see the world differently. So much so that on a random weekend, they rose to the occasion of danger and discomfort and bailed out a person who was otherwise without hope.

The investment in Christ School Bundibugyo changes the lives of the students enrolled now, the students next year, and the alumni out in the world.  And ripples outward to the thousands of families and businesses and schools and health centers where these young men and women live and work. 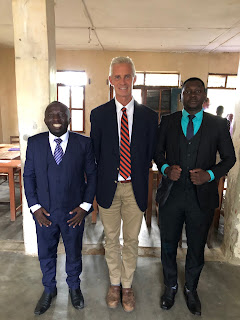 Scott with Michael and John, two OB’s (Christ School Old Boy aka Alumni), at the CSB Board Meeting

This story is about the Christ School Alumni network and how they responded, unprompted by us. We came alongside when THEY reached out to us, not the other way around.

It’s about the way investments in schools and students continue to grow as those people mature and change their world.

In spite of all the hard realities of life here, it is a privilege to witness the maturing of these kids into adults I respect, admire, and love.

If you would like to invest in the students at Christ School Bundibugyo, make a transformational gift to Christ School.  Just $1 a day provides a gospel-centered education, spiritual mentoring, and 3 meals a day.